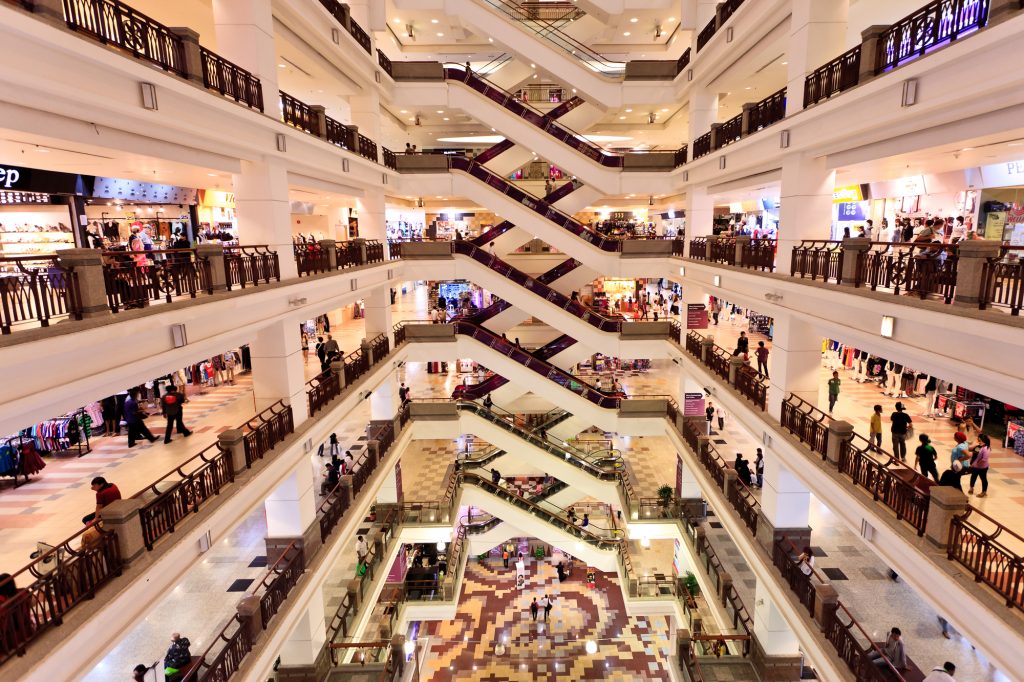 The 19 Biggest Shopping Malls In The United States

The biggest shopping mall in the United States is the Mall of America in Bloomington, MN. With a total of 12 anchor stores and entertainment venues, including the Nickelodeon Universe and Sea Life Minnesota Aquarium, the Mall of America is only 193,200 square feet smaller than the second and third malls on our list combined!

The biggest shopping mall on the West Coast of the United States, South Coast Plaza Mall is also one of the oldest in the country. Unlike other malls on this list, it is still owned by the Segerstrom Family who originally developed the property in 1967. While it ranks 4th in size by square footage, South Coast Plaza had the highest pre-COVID retail sales volume of any shopping mall in America at $1.5 billion annually. A luxury shopping destination, its 275 stores represent the highest concentration of design fashion retail stores in the country.

The largest mall in Florida, and the Southeastern United States, the Aventura Mall his home to over 300 stores and 50 restaurants. it also features the Arts Aventura Mall, an experiential art exhibit. The exhibit includes Rainbow Valley playground, South Florida’s first interactive playground and the Aventura Slide Tower, a 93 foot tubular slide.

The largest mall in New York, Destiny USA is also the tallest mall in the top 10 with 6 floors of retail stores, dining, and entertainment options. The mall was built on top of an old scrap yard in an industrial section of Syracuse known as “Oil City” as part of an overall redevelopment of the area.

Roosevelt Field is the largest shopping mall on Long Island and the second largest in the state of New York. The property was originally an airport and landing strip, known as Roosevelt Field. Charles Lindbergh’s solo transatlantic flight took off from the air strip in 1927.

Taking over 16 years to receive approval and buil, the Palisades Center is the 2nd largest mall in the greater New York City and the 12th largest in the United States. It is one of the busiest and most lucrative malls in the country with more than 20 million annual visitors generating over $40 million in sales taxes.

One of the largest single story malls in the country, Millcreek Mall ranks as the 13th largest mall by square footage. Located in Northwest Pennsylvania, the mall attracts millions of shoppers from New York, Ohio, and even Canada looking to save money by taking advantage of Pennsylvania’s sales tax exemption on clothing.

Woodfield Mall is the largest shopping mall in Illinois and the 14th largest in the country. Located northwest of Chicago’s famous downtown “Loop”, the mall attracts over 27 million visitors. When the mall opened in 1971 it was the largest shopping mall in the United States. As a result, a 750,000 gallon water tower was constructed simultaneously to support the anticipated development that would accompany the malls opening.

The second largest mall in Illinois, Oak Brook Center is the 15th largest mall in the United States. It is known for a blend of upscale luxury brand stores, fashion boutiques, and traditional mall retailers. Many consider it to be the 2nd most concentrate retail location for high fashion brands after South Coast Plaza Mall.

The oldest mall on this list, Lakewood Center remains one of the biggest and busiest malls in the country. Having undergone multiple renovations and expansions since debuting as an open air shopping center in 1951, Lakewood Center now boosts 12 anchor stores.

The 2nd largest mall in New Jersey an 3rd largest overall in the New York City area, Westfield Garden State Plaza ranks as the 18th largest in the country. One of the busiest malls in the country, it is among the highest revenue producing malls in the United States. CNBC ranked it ninth in the country, with average retail sales of $950 per foot. Making that even more impressive is the majority of the mall is closed on Sundays to state and local blue laws.

Last but not least on our list of the largest malls in the United States is Arundel Mills mall. One of the newer malls on our list, Arundel Mills is the first enclosed mall to feature a Medieval Times dinner theater to go along with a whopping 17 anchor stores. The mall has been sponsored by major brands including Coca-Cola, Comcast, Discover Card, and Toyota.

Property managers can use BidSource to have the Property Manager Insider team locate a qualified commercial contractor for their next project or service call. Just fill out the form with your project details and a member of our team will be in touch.

We use cookies on our website to give you the most relevant experience by remembering your preferences and repeat visits. By clicking “Accept”, you consent to the use of ALL the cookies.
Cookie settingsACCEPT
Manage consent